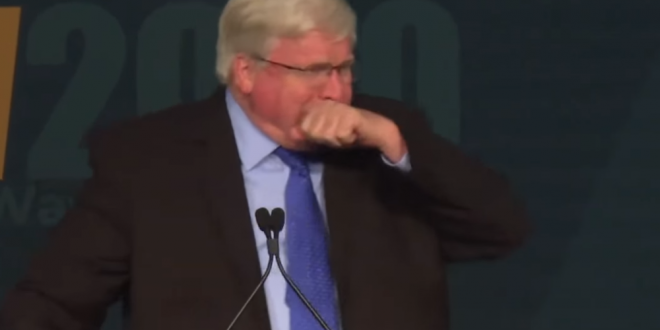 Wisconsin congressman Glenn Grothman broke out into an unmasked coughing fit at the microphone of his speech at the GOP state convention in Green Bay on Saturday.

Grothman, who is 65, falls in a high-risk category for COVID-19 complications. He has publicly signaled optimism about the trajectory of the pandemic, appearing at public events without a mask and sharing statistics about falling COVID-19 death rates.

This weekend, Wisconsin health officials warned the state recorded a record number of new COVID-19 cases for the third day in a row and urged the public to wear face masks, maintain physical distancing and wash their hands to limit the spread.

Organizers of the GOP event had issued guidelines to attendees that urged anyone with symptoms of the infectious respiratory disease to avoid the state convention. They said free face masks and hand sanitizer would be made available throughout the event.

Will Kenneally, a news editor for PBS Wisconsin who attended the convention, tweeted that a total of 322 people had attended. He said “maybe a dozen” people could be seen in face coverings.

The final clip below is a supercut.

RELATED: While a Wisconsin state rep, Grothman opposed an anti-bullying bill, saying that teachers would would have an “agenda to persuade students to be gay.” Grothman has said that Kwanzaa is not a real holiday and MLK Day should not be one at all. His biggest claim to fame, until today, was being featured in a John Oliver segment titled, “People Who Somehow Got Elected.” He was reelected by a 9-point margin in 2018.

With all his supporters avoiding masks while crowding together in groups, this is quickly going become the official way to say Trump’s name. https://t.co/woIlr9KIs3