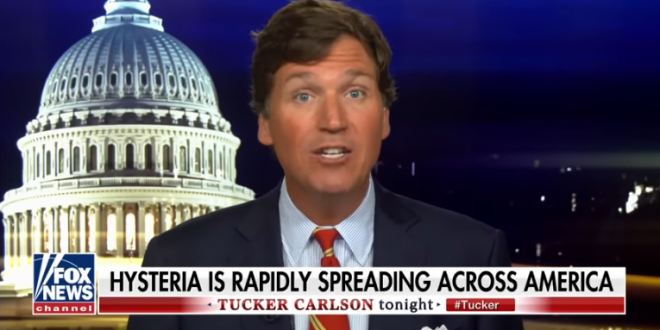 “On Memorial Day weekend, a man called George Floyd died in police custody in Minnesota. That’s where this outbreak first began. Minneapolis was our Wuhan. The first cases appeared a little over a month ago. Here’s the state of the pandemic now.

“He almost certainly didn’t mistreat him personally. So why are people attacking Columbus’ statue? Well, who knows? You’re definitely not allowed to ask. Questions are not permitted during hysteria epidemics. Logic of any kind seems to dramatically increase the severity of the symptoms.

“A patient may appear to be recovering from hysteria, speaking in nearly complete sentences, bathing independently on occasion. But then a single direct question will send him into a tailspin.

“A renewed attack of slogan-shouting, anarchist graffiti, hours of hostile tweeting. The disease back in force. It’s safer not to say a word.” – Tucker Carlson, on last night’s show.