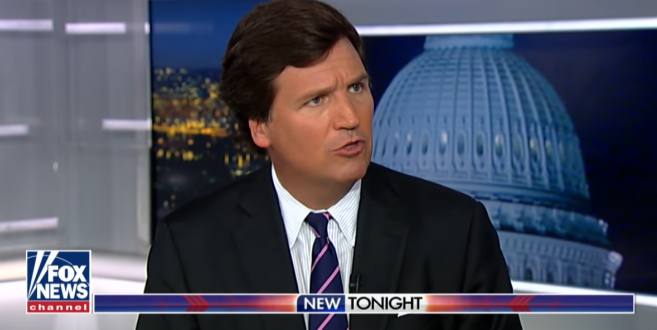 The Fox News star Tucker Carlson said on Monday evening that he would leave on a vacation, starting immediately, days after a writer on his program, Blake Neff, resigned over racist, sexist and misogynist messages that Mr. Neff published pseudonymously on an online message board. Mr. Carlson told viewers that he would return to his show next week and described the vacation as “long planned,” suggesting that his time off had been set before Mr. Neff was revealed on Friday as the author of the offensive posts.

It was not the first time that Mr. Carlson has announced that he would take a break from the anchor chair in the immediate aftermath of a sensitive moment for his prime-time program. Last August, Mr. Carlson went on vacation two days after he likened white supremacy to a “hoax,” saying it was “actually not a real problem in America,” remarks that prompted some advertisers to distance themselves from his show.

This whole show has been incredibly low-energy for Tucker Carlson, almost as if he’s aware that top Fox executives almost never watch his show and thinks that if he can put up a less-insane version for a day or two they’ll lose interest.

“Blake was horrified by the story,” Tucker says, as though Neff didn’t write the racist/sexist posts himself.

“We don’t endorse those words. They have no connection to the show,” Carlson adds, despite the fact his top writer’s posts were repeatedly echoed in his show’s scripts. https://t.co/f0yYZ0sr4j