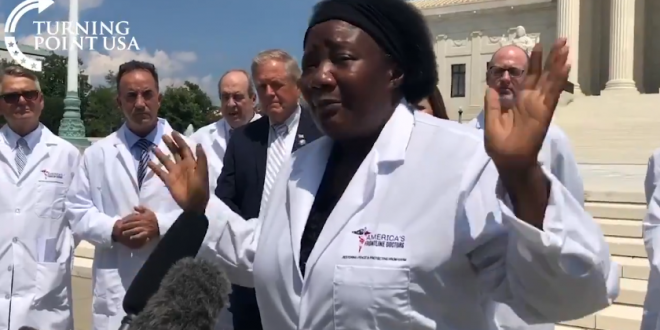 Dr. Stella Immanuel, a pediatrician and a religious minister, has a history of making bizarre claims about medical topics and other issues. She has often claimed that gynecological problems like cysts and endometriosis are in fact caused by people having sex in their dreams with demons and witches.

She alleges alien DNA is currently used in medical treatments, and that scientists are cooking up a vaccine to prevent people from being religious. And, despite appearing in Washington, D.C. to lobby Congress on Monday, she has said that the government is run in part not by humans but by “reptilians” and other aliens.

Toward the end of Immanuel’s speech, the event’s organizer and other participants can be seen trying to get her away from the microphone. But footage of the speech captured by Breitbart was a hit online, becoming a top video on Facebook and amassing roughly 13 million views.

Twitter has lost its marbles over people sharing the Breitbart video of Dr. Stella Immanuel talking about her experience treating COVID-19 patients with Hydroxychloroquine, Zinc, and Zithromax.

Hello Facebook put back my profile page and videos up or your computers with start crashing till you do. You are not bigger that God. I promise you. If my page is not back up face book will be down in Jesus name.

I double dog dare y’all give me a urine sample. pic.twitter.com/Xe0U09W9Pl

If you’re gay, Dr Stella Immanuel will pray the gay away.
She doesn’t mention whether hydroxychloroquine is part of the treatment. pic.twitter.com/Rm2XXsdLtJ