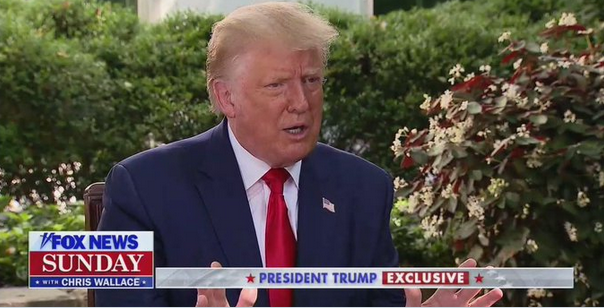 When asked if he is gracious, Trump said, “You don’t know until you see. It depends.” He then claimed that mail-in voting, which Democrats have pushed as a response to the coronavirus pandemic, “is going to rig the election.”

The president then decided to ask aides for a chart on the mortality rate and was immediately provided with one, telling Wallace he should show the chart “because it shows what fake news is all about.”

A voiceover from Wallace explained that they “went with numbers from Johns Hopkins University which charted the mortality rate for 20 countries hit by the virus” that found the US ranked 7th, while the White House went with different stats.

Chris Wallace: You’ve been wrong a lot on coronavirus, claiming it will quickly disappear and go down to zero/

Trump: “I will be right eventually…I’ll say it again, it’s going to disappear.” pic.twitter.com/LonHZVO8qB

My favorite part of the very good Chris Wallace interview with @realDonaldTrump:
TRUMP: “Now we have the 1619 project. What is THAT all about?”
WALLACE: “Slavery.”

Chris Wallace on the mental acuity test that Trump brags about acing: “It’s not – well it’s not that hardest test. They have a picture and it says “what’s that” and it’s an elephant.”

Trump: “Many of those cases are young people that would heal in a day. They have the sniffles and we put it down as a test.”

Trump to Chris Wallace in the @FoxNewsSunday interview: “Let Biden sit through an interview like this, he’ll be on the ground crying for mommy. He’ll say mommy, mommy, please take me home.”

Chris Wallace: “Can you give a direct answer you will accept the election?”
President Trump: “I have to see. No, I’m not going to just say yes.” @realDonaldTrump #FoxNewsSunday

Chris Wallace told Trump that the military is in favor of (either the defense spending bill or renaming bases named for Confederates – it wasn’t exactly clear in the transcript).

Trump: “I don’t care what the military says. I do – I’m supposed to make the decision.”

Chris Wallace pushes back on Trump’s inaccurate claim that if there was less testing there would be fewer cases. “Testing is up 37 percent.” Trump: “Well, that’s good.” Wallace: “Cases are up 194 percent. It isn’t just that testing has gone up, it’s that the virus has spread.”

Yea, this Chris Wallace interview is insane, and yea, Trump is utterly unfit, but I’m watching it and thinking that I can’t wait to have a President who doesn’t tell us on national TV that he’s a genius because he can identify an elephant. Or a camel. Or count backwards from 100.

“Religion will be gone” — Trump offers some absurd fear-mongering about what will happen if Biden is elected pic.twitter.com/xIVECroUHd

“I’ll be right eventually” — Trump defends his comment that the coronavirus will “disappear” on its own pic.twitter.com/OT5zf23emD

Chris Wallace cut away from Trump claims to narrate: “The White House never sent us evidence the Bernie-Biden platform calls for defunding or abolishing the police — because there is none.”