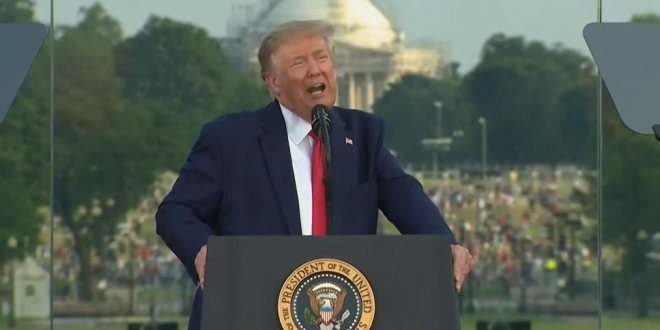 Trump Warns TV News Ratings Will Suffer If He Loses

Last month, when asked what new goals he would accomplish in a second term, President Trump rambled so incoherently his allies responded with public distress. But now, finally, Trump has an agenda for his second term that he can credibly commit to.

It is almost certainly true: Under a Biden presidency, cable news ratings will probably sag. Fox News will be fine, inventing new ways to whip its audience into hysteria. But CNN and MSNBC, deprived of Trump’s unprecedented stream of scandal, mismanagement, crisis, leaks, and racism, will suffer.

The pre-Trump routine of watching people with good hair and no face mask stand in front of buildings waiting for officials to make anodyne statements will feel intolerably dull after four years of chaos.

Is this what you want for your President??? With no ratings, media will go down along with our great USA! https://t.co/dtJm3J2BPr

News media may be upset at lower rating for news, but HOW FUCKING AWESOME WOULD IT BE FOR THE REST OF US TO NOT HAVE TO WATCH THE NEWS CONSTANTLY TO LEARN ABOUT WHAT HORRIBLE THING JUST HAPPENED. BORING NEWS SOUNDS AWESOME!!!

Over 135,000 people unnecessarily dead from COVID-19, due to your incompetence, and you’re tweeting about RATINGS?

What a fucking moron.

no mister president sir, I much prefer an in-over-his-head moron who went broke running casinos and who refuses to listen to experts while a pandemic rages. who wouldn’t?