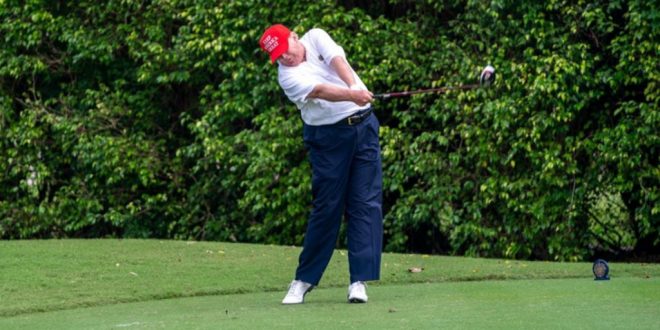 The short and understated sentiment made no mention of the animosity that developed between the two men early that developed when Lewis questioned the legitimacy of Trump’s 2016 election victory and the president attacked Lewis’ district. Trump, however, was far less loquacious in his tweet than many of his senior aides.

Trump signed a proclamation ordering flags flown at half-staff Saturday but had not issued a statement on Lewis’ death until mid-afternoon. Four of his predecessors – Barack Obama, George W. Bush, Bill Clinton, and Jimmy Carter – along with congressional leaders of both parties did so much earlier.

Trump’s tweet only came after he finished a round of golf with Lindsey Graham.

Saddened to hear the news of civil rights hero John Lewis passing. Melania and I send our prayers to he and his family.

You’re literally golfing right now, dipshit. We all know you didn’t write this.

He wrote it. Notice the misuse of pronouns.

On top of your prayers, how about just stop being so racist? John Lewis fought against so much of your injustice.

You were up late last night, tweeting about GARBAGE long after the world learned of the passing of Rep. John Lewis.

Then you went and played golf today instead of saying anything.

NOW say “Black Lives Matter,” because HIS certainly did.

Congressman Lewis used some of his last ounces of strength to come out and show support for #BlackLivesMatter . pic.twitter.com/UVrOKo2ga4

I think I speak for many when I say go fuck yourself.

No you’re not. You played golf all fucking day before saying one word about #JohnLewis. You’re not sad at all. Just begrudgingly obligated… #Trump