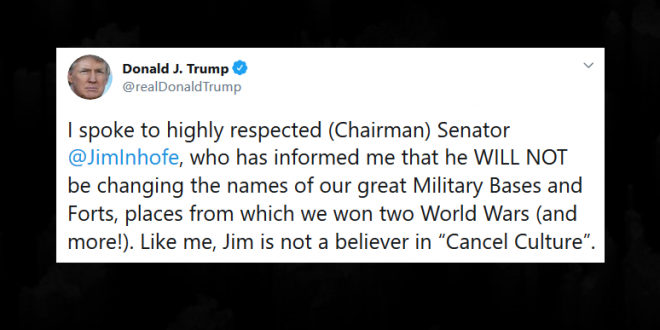 Oklahoma Sen. Jim Inhofe, chairman of the Senate Armed Services Committee, predicted that a provision would be removed from the bill that requires the 10 military bases named after Confederate generals to be renamed.

Inhofe said he spoke with President Donald Trump on Thursday about the provision, which the president and Inhofe oppose. “We’re going to see to it that provision doesn’t survive the bill,” Inhofe said. “I’m not going to say how at this point.”

The House bill includes a similar provision. The White House threatened to veto the House bill over the provision, but the legislation cleared with a veto-proof majority.

I spoke to highly respected (Chairman) Senator @JimInhofe, who has informed me that he WILL NOT be changing the names of our great Military Bases and Forts, places from which we won two World Wars (and more!). Like me, Jim is not a believer in “Cancel Culture”.

Cancel culture isn’t new. Republican Joe McCarthy was a master. Many, many actors and entertainers were blacklisted.

Trump has tried to cancel NFL players who kneel, CNN, and, you know, peaceful protesters.

He isn’t against cancel culture. He’s against the shift in power.

He’s actually a very silly man who brought a snowball on to the Senate floor to disprove global warming.

Our own military wants to rename these bases. How about you let them decide what their home is called? Most don’t want it named after losers.

Previous OAN Host: QAnon Is A “Widely Accepted Belief System”
Next Christian Site: “Witchcraft Is Behind” The Pandemic