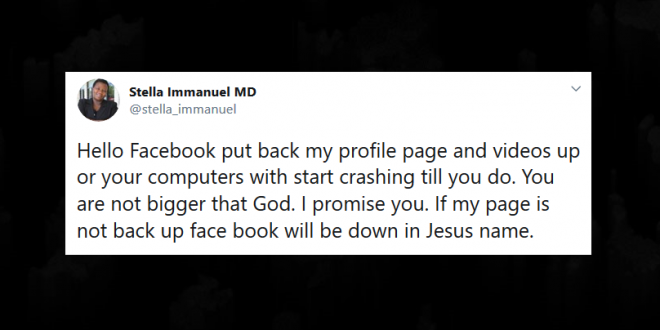 President Donald Trump went on a late night Twitter binge on Monday with more than a dozen posts pushing dubious claims about the drug hydroxychloroquine, including twice retweeting a video from a woman falsely claiming that the drug was a “cure” for Covid-19 and that “you don’t need a mask.”

Two of Trump’s Monday night tweets focused on Stella Immanuel, who had appeared outside Capitol Hill on Friday with a several other doctors to make a series of outlandish claims while dismissing other “fake doctors” who doubt the efficacy of the drug as well as the idea of double blind clinical studies to scientifically test medical treatments.

The video of Immanuel racked up more than 14 million views on Monday, thanks in part to promotion from the far right site Breitbart News, which had broadcast a Periscope of the event where Immanuel spoke on its Twitter timeline.

Trump shared a tweet directly from Dr. Stella Immanuel, one of the physicians who took part in the press conference. Immanuel is also a preacher who once wrote a book claiming that there is a Satanic plot to take over the world and recently challenged CNN anchors and top infectious disease expert Dr. Anthony Fauci to provide her with urine samples. (The video tweeted by Immanuel, along with several others the president shared, were later taken down.)

She also didn’t take kindly to Facebook removing the video of her saying masks don’t work and that hydroxychloroquine is a magic cure for the virus. “Hello Facebook put back my profile page and videos up or your computers with start crashing till you do,” she tweeted late Monday night. “You are not bigger that God. I promise you. If my page is not back up face book will be down in Jesus name.”

The insane video continues to be spread by far-right personalities, including the below anti-LGBT and QAnon crackpot who is running for the US House. Twitter has deleted as least two of Trump’s retweets at this writing.

African American #COVID Doctor risks her life and career to say there’s a cure for coronavirus. She co-signs TRUMP on #hydrochloroquine says it works 🇺🇸 pic.twitter.com/TJlhWD0Yic

Hello Facebook put back my profile page and videos up or your computers with start crashing till you do. You are not bigger that God. I promise you. If my page is not back up face book will be down in Jesus name.