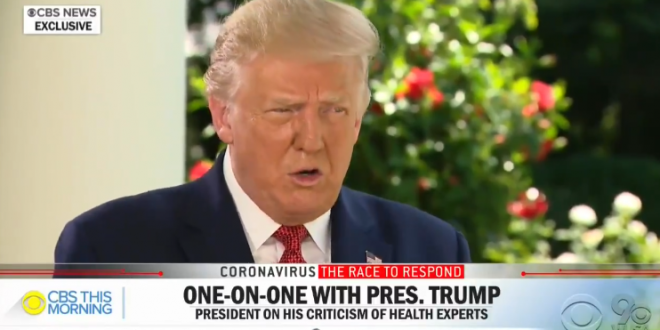 Trump: “Many People Feel Testing Is A Trap” [VIDEO]

Speaking with CBS’ Catherine Herridge, the president stood behind his Monday morning retweet of former game show host Chuck Woolery — who claimed that “everyone” is lying about the virus for political purposes.

Herridge confronted Trump about the mixed messaging resulting from his retweet. “You understand this is confusing for the public,” Herridge said. “No,” Trump said, interjecting.

“I reposted a tweet that a lot of people feel,” Trump said. “But all I’m doing is making a comment. I’m just putting somebody’s voice out there. There are many voices. There are many people that think we shouldn’t do this kind of testing, because all we do, it’s a trap.”

Meanwhile, @nytimes: “There is now only one high-income country in the world in which the virus is spreading rapidly: the United States.” https://t.co/IQZOUOZ6Z2 pic.twitter.com/2n34BjuoIh