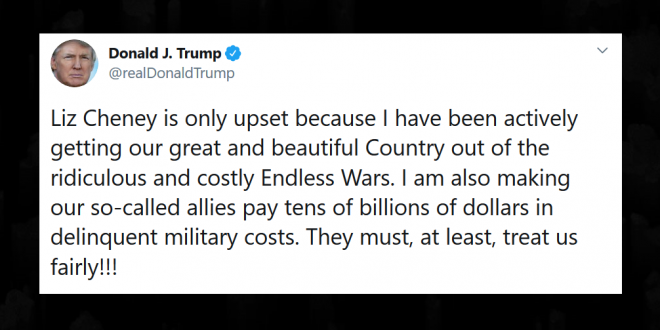 President Trump on Thursday took a swipe at House GOP Conference Chairwoman Liz Cheney (Wyo.) and amplified accusations from other Republicans that Cheney is working against the president’s agenda.

The president then shared a tweet from Sen. Rand Paul (R-Ky.) stating that Cheney is “leading the fight” to stop Trump from withdrawing U.S. troops from overseas conflicts.

Paul’s tweet itself shared a message from Rep. Matt Gaetz (R-Fla.) accusing Cheney of disloyalty to Trump and demanding she “step down or be removed” as GOP conference chair.

Liz Cheney is only upset because I have been actively getting our great and beautiful Country out of the ridiculous and costly Endless Wars. I am also making our so-called allies pay tens of billions of dollars in delinquent military costs. They must, at least, treat us fairly!!!

It’s like Putin owns Trump’s mind, body, and soul. Calling our NATO allies “so-called allies” is a deep betrayal and jeopardizes our security and position in the world. Trump is turning America into a loner country so that a rising Russia and China can toss us around. Shameful.

One day your rapidly declining brainwashed base will realize that the reason most people in America…incl Dems, indies, mod Repubs, media, scientists, etc…think you’re an ignorant, incompetent, pathologically-lying, corrupt dangerous traitor is because…you are