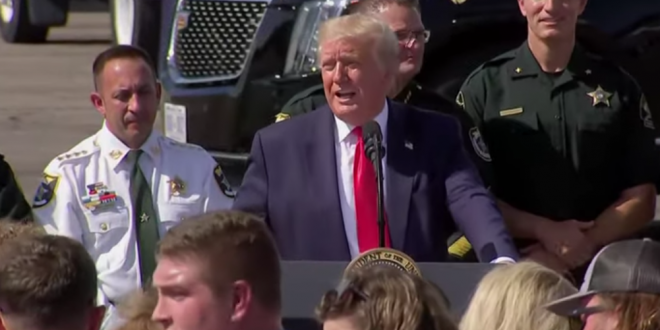 President Trump on Friday held a scaled-down campaign-style rally on an airport tarmac in Florida, drawing a crowd of supporters who packed closely together in a state that has been devastated by the coronavirus pandemic.

The president landed in Tampa and was greeted by dozens of supporters who had gathered along barricades. Few were seen wearing masks, and music that has become standard at Trump campaign events blared over speakers for what was billed as a “Campaign coalitions event with Florida sheriffs.”

“If Joe Biden is elected president, the chaos and bloodshed will spread to every community in our land. You’ll have a Portland everywhere,” he said, referencing clashes between protesters and federal agents deployed to Oregon.