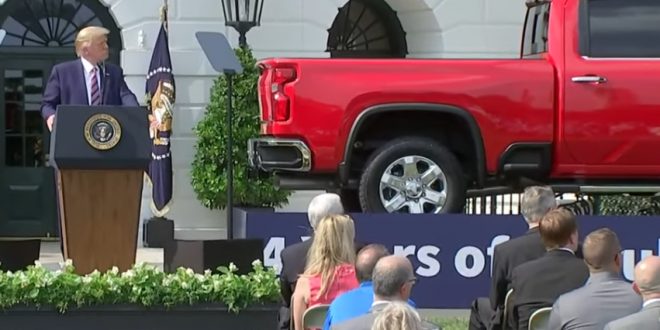 Breitbart slobbers in their usual fashion:

President Donald Trump on Thursday at the White House promoted his successful push to dramatically reducing the regulatory burden on American industry. The president appeared on the South Lawn of the White House with a backdrop display of two Chevrolet trucks, one blue truck weighed down with weights symbolizing the regulatory burden, another red truck with the weights being lifted off by a crane that symbolized the Trump administration.

The president singled out the removal of former President Barack Obama administration’s Waters Of The United States (WOTUS) rule that threatened the property rights of ranchers and landowners. One rancher spoke at the event, thanking the president for cutting the WOTUS regulation. “You have set us free,” the rancher told Trump. “Thank you.” Some of the regulations Trump talked about removing were governing household appliances, including dishwashers, lightbulbs, and showerheads.

On South Lawn, WH seeks to make a political point by setting up a crane lifting the weights of regulation from the bed of a “red” truck, while showing the burden of regulations weighing down a “blue” truck. pic.twitter.com/OoWmRPnWum

“We didn’t have ventilators,” Trump says again, though his administration confirms that it inherited about 19,000 from the Obama administration, including all 16,660 that were ready to be deployed in march. https://t.co/oU7nsxY6bi

Trump, again speaking in barely veiled racial code, again ridiculously accuses Democrats of trying to “abolish our beautiful and successful suburbs.” He says, “Your home will go down in value and crime rates will rapidly rise.”

Trump falsely accuses the Democrats of looking to abolish the police. He then suggests that abolishing cash bail means that murderers have to be let out. It does not.

Trump again takes credit for deploying the National Guard in Minneapolis. That was a decision of Minnesota’s Democratic governor, who served 24 years in the Guard; he did it before Trump weighed in. https://t.co/NuO4ZE5L5f

“We made it so dishwashers now have a lot more water, and in many places, in most places of the country, water is not a problem … it’s called rain” – Trump is out here doing a “The Price is Right” episode and whining about wimpy lib faucets that don’t have enough water pressure pic.twitter.com/3zDoAsKTlq

Trump tells his lie about how, when he signed his executive order on the Waters of the US rule in 2017, “people that haven’t cried since they were a baby, some of them never even when they were a baby…they were crying.”