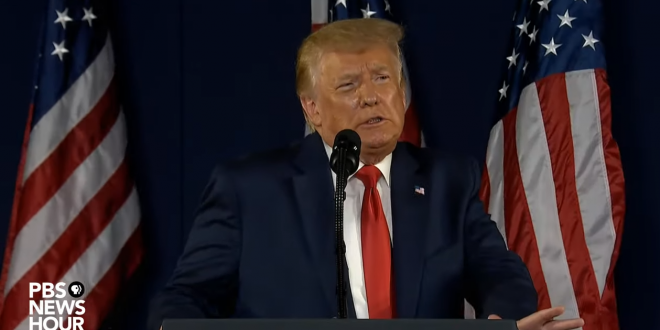 At the foot of Mount Rushmore’s granite monument to his presidential forebears, President Trump on Friday delivered a dark speech ahead of Independence Day in which he sought to exploit the nation’s racial and social divisions and rally supporters around a law-and-order message that has become a cornerstone of his reelection campaign.

Trump focused most of his address before a crowd of several thousand in South Dakota on what he described as a grave threat to the nation from liberals and angry mobs — a “left-wing cultural revolution” that aims to rewrite U.S. history and erase its heritage amid the racial justice protests that have roiled cities for weeks.

As he has done with increasing fervor in recent weeks, the 45th president denounced not just rioters and vandals but also much of the social movement that propelled the mass demonstrations in response to the killings of black men at the hands of police.

Under the granite gaze of Washington, Jefferson, Lincoln and Theodore Roosevelt, Mr. Trump announced plans to establish what he described as a “vast outdoor park that will feature the statues of the greatest Americans to ever live,” an apparent repudiation of the growing pressure to remove statues tied to slavery or colonialism.

As he arrived, Air Force One performed a flyover of Mount Rushmore. His campaign promoted the stunt online, calling him “the coolest president ever.” In the amphitheater below, few in the packed crowd practiced any social distancing as people waved signs that referred to CNN as the “Communist News Network.”

In remarks that offered little by way of reconciliation, he went on to rail against “cancel culture, driving people from their jobs, shaming dissenters and demanding total submission from anyone who disagrees. This is the very definition of totalitarianism, and it is completely alien to our culture and to our values. It has absolutely no place in the United States of America. This attack on our liberty, our magnificent liberty, must be stopped, and it will be stopped very quickly.”

He added darkly: “In our schools, our newsrooms, even our corporate boardrooms, there is a new far-left fascism that demands absolute allegiance. If you do not speak its language, perform its rituals, recite its mantras and follow its commandments, then you will be censored, banished, blacklisted, persecuted and punished.” Gesturing to the overwhelmingly white crowd, he said: “Not going to happen to us.”

Listening to @realDonaldTrump’s #MtRushmore speech, I was reminded of the eloquent words of George Bush: “Well, that was some weird shit.” https://t.co/R1DUbdxfbT

Not watching. Is he still telling the ramp story?

are you questioning his grasp of hustory https://t.co/C34I3Crqxa

He’s reading this speech like a middle school C- student who had Mommy write it out for Civics class.

Trump’s message at Mount Rushmore tonight: “We’re a white nation. You minorities need to learn your place in it.”

It’s kinda cool that we’re hearing the speech for the first time, just like the president.

Previous Junior’s Girlfriend Kimberly Guilfoyle Tests COVID+
Next Neil Young: It’s “NOT OK” For Trump To Use My Music