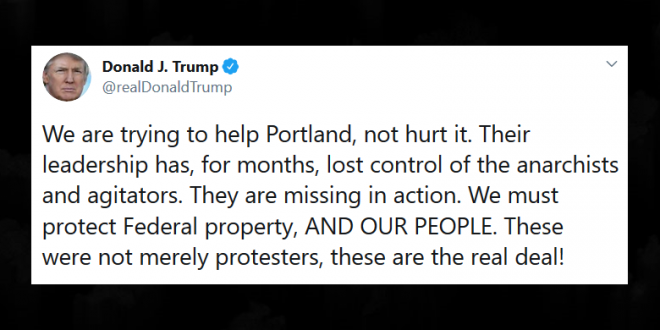 Donald Trump said he is trying to “help” the city of Portland amid controversy over a decision to send federal agents to crack down on protests there.

Local lawmakers accused the Trump administration of an “abuse of power” for deploying masked, militarised federal agents to the city, ostensibly to protect federal buildings.

The officers have been accused of driving unmarked cars and seizing people from the street in recent days in the city, which has seen nightly protests for racial justice since the police killing of George Floyd.

We are trying to help Portland, not hurt it. Their leadership has, for months, lost control of the anarchists and agitators. They are missing in action. We must protect Federal property, AND OUR PEOPLE. These were not merely protesters, these are the real deal!

because nothing says rock-solid American values like anonymous military goons disappearing citizens into unmarked vans and taking them who knows where. the whole world is watching, bro. read the room. this is not your path to reelection

No violent crimes, only vandalism, and Trump’s response is throwing away our civil liberties.

As unmarked feds snatch protesters off the streets in Portland, memo leaked to me shows they’ll be deployed indefinitely and in undisclosed locations, with drones “on standby to assist as needed”:https://t.co/dIrNSlbM6B pic.twitter.com/LR4COtuvGs