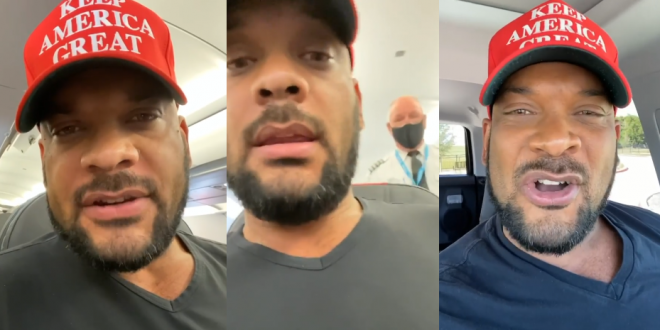 Pro-Trump personality David J. Harris Jr. held up an entire American Airlines flight on Saturday for apparently not complying with the company’s mask policy, and instead, made a scene in the noble fight to defend one’s personal “rights” to not wear a face-covering on board.

“So because I declared that I have a medical reason to not wear a mask, people on the plane are tripping out and may not want to fly on this plane,” the pundit began in a 3-minute video posted to Instagram.

A few seconds later, the flight captain could be heard over the intercom, presenting the opportunity for passengers who didn’t feel safe to re-book their travel due to Harris not wearing a mask. The flight’s captain could then be seen approaching and speaking to Harris – which the pundit selectively edited out of his Instagram post.

At the end of the clip, Harris exults that he was not thrown off the flight and that no passengers decided to leave the plane. On Twitter, people are demanding an explanation from American Airlines. Harris regularly appears on right wing cable shows, including Sean Spicer’s Newsmax show.

If you have a medical reason, you do not have to comply. There are lots of conditions on the list. Know your rights! Know the truth! And please know, unless you’re wearing an N95 mask, any cloth covering or ear loop will not stop you from getting it! #know #the #truth #stand #up #for #your #rights