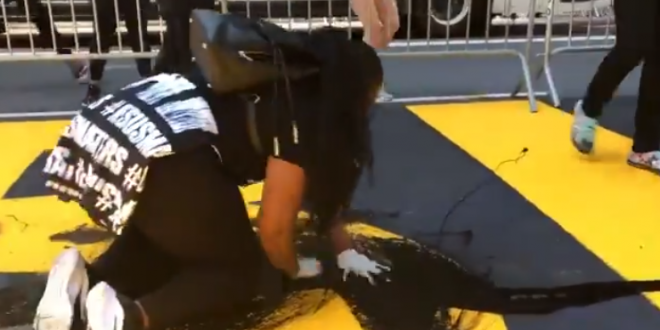 Two women were arrested Saturday afternoon for smearing black paint across the “Black Lives Matter” mural outside Trump Tower, with a city cop injured after he slipped while grabbing one of the suspects, police said.

The chaotic scene — the third attack by vandals targeting the Midtown street art in a week — began around 3 p.m. when a car carrying four women and 10 cans of paint arrived at the Fifth Ave. site, according to witness/street artist Nina Khan and a photo of the vehicle.

The screaming woman, Beverly Beatty, whose Twitter profile says she’s the “wife of Christ,” was suspended yesterday by Twitter.

It appears that she may have a QAnon connection as those nutbags are promoting her actions with the hashtag #OperationPaintDrop.

As you’ll see in the second clip below, an NYPD officer takes a hard fall on the paint and strikes his head on pavement.

Refund the Police! These patriots are relentless! pic.twitter.com/lCjxeoWLfY

While she was getting arrested, she shouts, “Jesus matters…stand up, take your country back. Take the USA back…Trump 2020!” 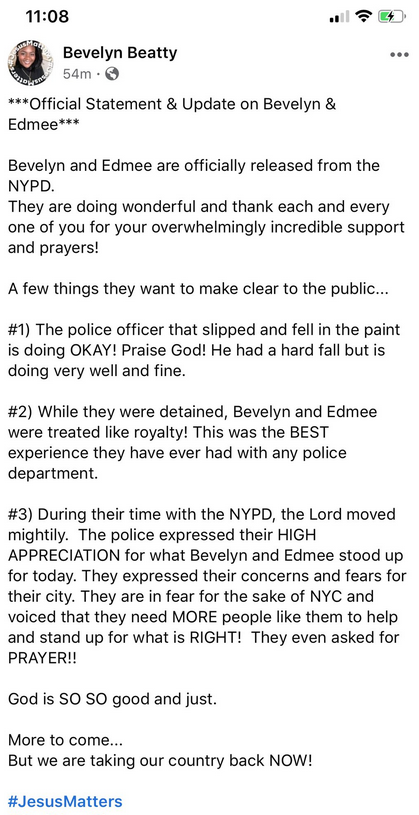