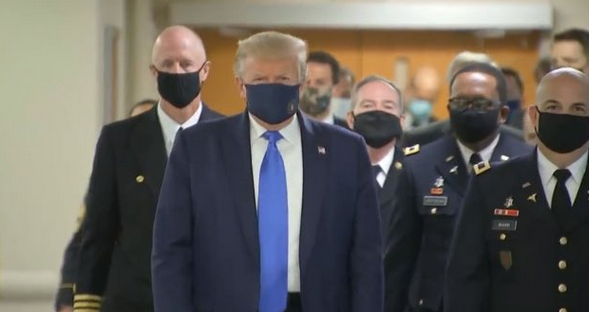 Members of President Donald Trump‘s reelection campaign are trying to spin Trump’s face mask appearance in the president’s favor as cases of the coronavirus rise in the U.S.

Trump finally donned a dark navy face mask while visiting the Walter Reed National Military Medical Center in Bethesda, Maryland on Saturday after months of refusing to wear one in spite of the growing coronavirus pandemic.

Moments after photos and videos of the president wearing a mask hit social media, members of Trump’s campaign were already working to give him the best possible coverage.

The news isn’t that he’s wearing a mask. The news is that he’s got the goddamn gall to visit our wounded soldiers after doing jack shit about his buddy Putin putting bounties on them.

It’s so pathetic that Trump’s staff needs to tweet this stuff to convince him he looks cool https://t.co/QdjuygdPSI

Previous Trump Rages At “RINOS” Over Roger Stone Criticisms
Next Trump: I Never Wanted That Shoddy Private Border Wall Which Was Only Built “To Make Me Look Bad”