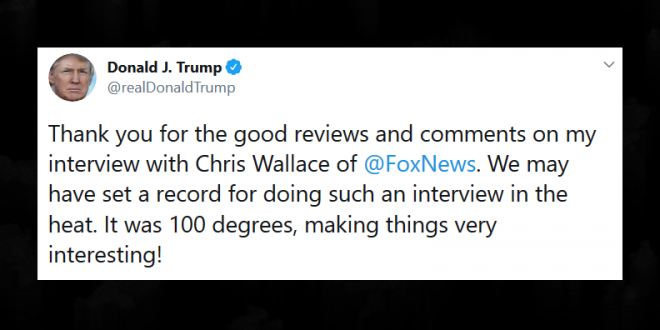 First, a couple of reminders:

During a bizarre Sunday interview filled with falsities and ridiculous statements, President Donald Trump claimed Joe Biden “doesn’t even know he’s alive” while boasting about his own mental health.

Fox News Sunday host Chris Wallace told the president that according to recent polling, including a Fox News poll, the American people say Biden is more mentally fit to serve as president than Trump.

Trump then referred to a cognitive test he claimed, earlier this month, to have taken at Walter Reed Medical Center and bragged to have “aced” the test so impressively that the doctors were “very surprised” and told him: “That’s an unbelievable thing. Rarely does anybody do what you just did.”

For the first time, Trump was not allowed to ramble, change the subject, exaggerate or repeat his oft-repeated lies. He tried, but Wallace challenged him, corrected him, fact-checked him and badgered him into answering the question — leaving Trump flustered, confused, angry, baffled and unable to substantiate any one of his standard big lies.

On the coronavirus, for example, Trump again insisted the United States has done more testing and has a lower mortality rate than any other country — which Wallace showed is demonstrably not true. Trump also showed a stunning lack of knowledge about how bad things are and lack of concern for victims of the disease.

Thank you for the good reviews and comments on my interview with Chris Wallace of @FoxNews. We may have set a record for doing such an interview in the heat. It was 100 degrees, making things very interesting!

what planet are you on? you bragged about pointing to an elephant

Will Joe Biden do a sit down interview for an hour with Chris Wallace under the same conditions as President Trump? No questions in advance or any topic off limits? No teleprompter or notes or handlers in his ear?

1. Your Chris Wallace interview was an unmitigated disaster
2. Having the interview in the heat was YOUR idea, moron
3. Chris Wallace was bone dry, while you were drenched in sweat
4. YOU ARE A JOKE. pic.twitter.com/g2OoAgwOWG

Has Kayleigh been lying to you again? Sad! The reviews actually said you were an #UnpresidentedIdiot. @MeidasTouch even made an ad about it using your own exact words! pic.twitter.com/84CMjpMkQ2

The President has dementia. That is why he takes tests for dementia. He brags about doing well on dementia tests. That is a sign of dementia. Letting tens of thousands of people die and not being concerned is also a sign of an unwell man. He needs to go. Immediately. https://t.co/dl5uFFcxsL