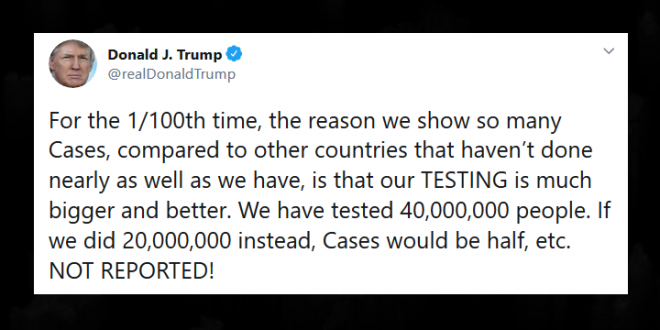 President Trump argues that the increase is a function of testing. It has been pointed out repeatedly that this isn’t the case, including by The Post nearly a month ago. As more data comes in, Trump’s repeated insistence on this point makes it more and more obviously wrong.

That’s particularly true since states that have seen increases in cases are more likely to also see increases in coronavirus-related deaths — deaths that are not occurring simply because the patients were tested.

Much of the national surge is a function of increased case totals in a handful of states. In fact, the 10 states that have seen the biggest increases in their own averages since June 9 now account for nearly 28,000 additional new cases per day — most of the 31,000 case-per-day increase in the national average.

1/100th? This is one one-hundredth of a time? Does that meant the first time is 28,000 characters long and this is the first installment in a very long thread? Also, who is Cases?

I can see why you didn’t want to take the SAT on your own.

For the 1000th time (not 1/1000th), The US is far behind in tests per capita. In fact there are 24 countries that have tested a larger percentage of their population than the United States. FACTS MATTER!

Previous Labor Dept Reports 1.3M New Jobless Claims For Week
Next WHO Sets Up Panel To Review Its COVID Response