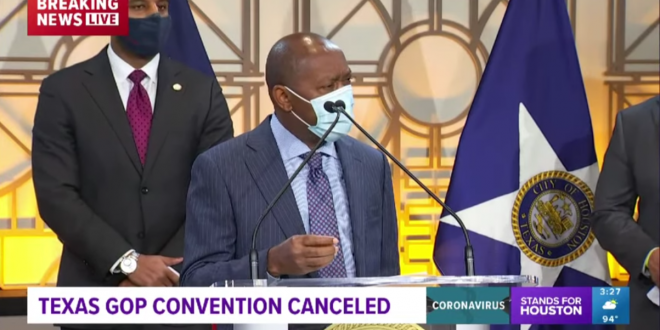 The Republican Party of Texas’ in-person convention next week has been canceled, Houston Mayor Sylvester Turner said Wednesday. The news came after Turner directed the city’s legal department to work with the Houston First Corp., which operates the George R. Brown Convention Center, to review the contract with the state party.

Turner said officials with Houston First sent a letter this afternoon to the State Republican Executive Committee, the state party’s governing board, canceling the gathering, which was set to happen July 16-18 and was expected to draw roughly 6,000 attendees.

The state party did not immediately respond to a request for comment. State party Chair James Dickey has said party leaders have worked on a contingency plan to host the convention online if an in-person gathering didn’t pan out.

The Democratic mayor of Houston stops the Texas Republican Party from holding its state convention in-person next week amid a spike in coronavirus cases https://t.co/M5EdS67TKN

Today I instructed the Houston First Corporation to exercise its right contractually in cancelling the State’s Republican Convention that was set to take place next week at GRB. #COVID19