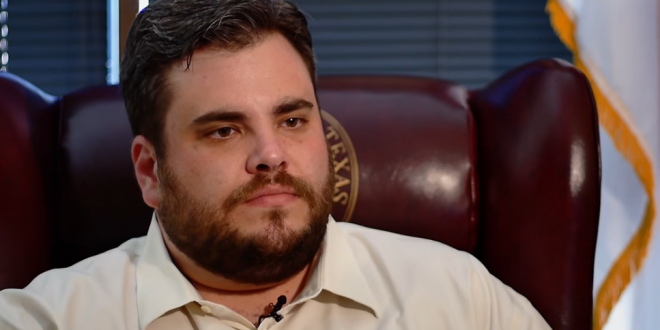 Texas State Rep. Jonathan Stickland, who said last year that vaccines were “sorcery,” said on Twitter this morning that aliens would only find salvation through Jesus.

If aliens are real, you would think there are bigger issues to deal with than their salvation.

(If nothing else, the existence of aliens would suggest humans are not, in fact, special — take that, Bible! — and that God has a secret family we didn’t even know about.)

From Strictland’s last appearance on JMG:

A Republican state legislator from Texas went on an extended Twitter rant on Tuesday, dismissing concerns over an ongoing measles outbreak in his state and calling vaccines “sorcery,” “dangerous,” and “self-enriching ‘science.’”

Rep. Jonathan Stickland, who represents a state legislative district near Fort Worth, initiated his outburst on Twitter after a Houston-based pediatrician and vaccine scientist, Dr. Peter Hotez, decried the rising number of vaccine exemptions being granted in the state.

IF aliens are real, salvation through Jesus Christ is the only way they enter Heaven. #txlege

Are you going to build a wall around heaven to keep aliens out? Are the aliens paying for it? 👽 how does this work? 👾

Quite sure you’re going to think the aliens are God incarnated, Jonathan, because their technology is going to look like miracles to us.

Also, because you’re an idiot.

If aliens are real, your entire belief system is a lie.

The aliens can’t quite get our hair right for their disguises pic.twitter.com/txs7M1ecAK