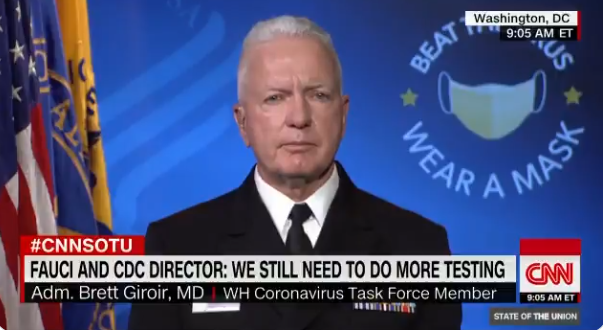 Testing Czar: I’m Not Afraid To Press Trump On Testing

Adm. Brett Giroir, the assistant secretary of Health and Human Services who is leading the administration’s coronavirus testing efforts, said Sunday that nobody on the White House coronavirus task force is afraid to press President Trump on the need to expand testing.

“Everyone at the administration understands the importance of testing. Nobody in the task force is afraid to bring up anything either to the vice president or president,” Giroir said Sunday on CNN’s “State of the Union.”

“Every time I’ve met with the president he’s been listening to all the data, he assesses that he understands it. No one is trying to stop testing in this country. No one has ever told me to do that, in fact we want more, we want better, we want quicker,” he added.

Admiral Brett Giroir on prioritizing for testing and availability: “Anyone who needs a test can get a test. We are not in a situation [where]… ‘I feel like going somewhere, so I need a test.’ That is not where we are. We are in the middle of a serious pandemic.” #CNNSOTU pic.twitter.com/BZTWurpHNZ

Admiral Brett Giroir says that the average turnaround time for Covid-19 tests is 4.27 days. “We are trying to bring that down … I’m never going to be happy until we have this under control.” #CNNSOTU pic.twitter.com/D2J92uJugX