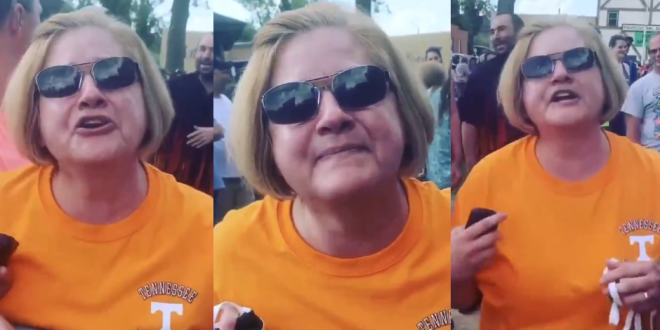 An Elizabethton woman has been fired after yelling racial and homophobic slurs at a Black Lives Matter rally this weekend. Keith Family Vision Clinic in Johnson City confirms Sonya Holt is no longer an employee there. She is the subject of a video that went viral over the weekend.

In the video, Holt is seen chanting, “White lives matter. White lives are better.” She yells at another protester, “You’re a gay homosexual piece of crap who’s going to burn in hell.” The clinic did not respond to our request for an interview.

In a more than 20-minute phone interview with News Channel 11’s Kaylyn Kluck, Sonya Holt expressed regret for her now viral comments. Holt agreed to speak with us over the phone, but did not want to do an on-camera interview.

“So I do apologize for saying that. I did not mean to demean anybody. Of course I apologize to her family. I did not know she was a minor. I am very, very, sorry for that,” Holt said.

In ELIZABETHTON, TN yesterday this woman was not feeling the #July4th spirit. Please help make her famous. (h/t @TriCitiesHoller) pic.twitter.com/x4gPHN3dIb

@karensgonewild_ Meet Sonya Holt, the East Tennessee Karen, the most inbred of the Karens! Video from the Elizabethton BLM protest yesterday. pic.twitter.com/ZuapcaHL94