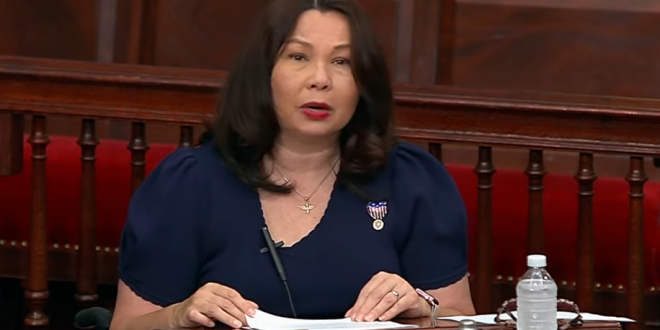 Tammy Duckworth Hits Back After Tucker Carlson Says She Hates America: “Walk A Mile In My Legs” [VIDEO]

Sen. Tammy Duckworth (D) on Monday night hit back at Fox News host Tucker Carlson after he criticized her for supporting a “national dialogue” on removing memorials to former President Washington. Carlson called out Duckworth Monday while giving a monologue on his Fox News show “Tucker Carlson Tonight.”

“You’re not supposed to criticize Tammy Duckworth in any way because she once served in the military,” Carlson said. “Most people just ignore her. But when Duckworth does speak in public, you’re reminded what a deeply silly and unimpressive person she is.”

“It’s long been considered out of bounds to question a person’s patriotism. It’s a very strong charge, and we try not ever to make it. But in the face of all of this, the conclusion can’t be avoided. These people actually hate America. There’s no longer a question about that,” Carlson claimed.

Does @TuckerCarlson want to walk a mile in my legs and then tell me whether or not I love America?