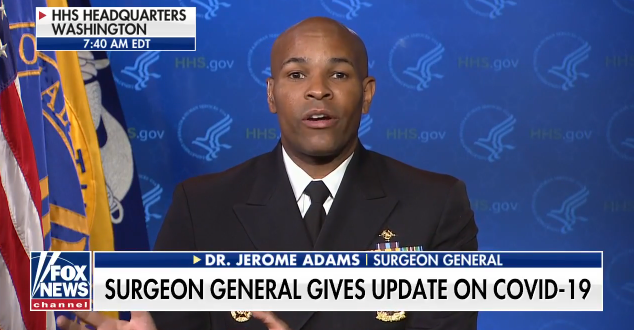 Surgeon General Jerome M. Adams on Monday cited the controversy over sending federal troops into Portland, Ore., to protect federal property as he argued against imposing a federal mandate on wearing masks as a means to combat the novel coronavirus.

During an appearance on Fox News, Adams championed wearing masks but sided with President Trump when asked whether it should be a federal requirement.

In doing so, Adams referenced an earlier segment on the network about resistance from officials in Oregon to the Trump administration’s decision to send in troops. “If you’re going to have a federal mandate, you have to have a federal enforcement mechanism,” Adams said.

Surgeon General Jerome Adams says on Fox News, “I’m pleading with your viewers, I’m begging you, please understand that we are not trying to take away your freedoms when we say wear a face covering.”