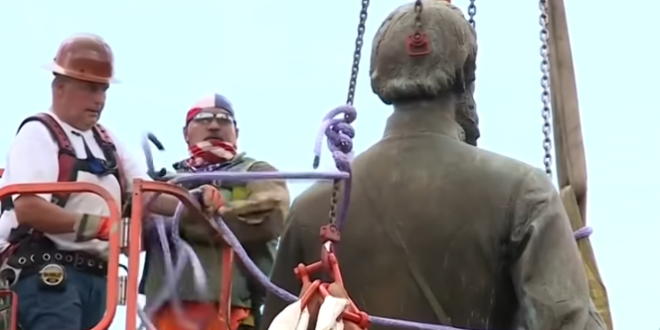 Work crews wielding a giant crane, harnesses and power tools wrested an imposing statue of Gen. Stonewall Jackson from its concrete pedestal along Richmond, Virginia’s famed Monument Avenue on Wednesday, just hours after the mayor ordered the removal of all Confederate statues from city land.

Mayor Levar Stoney’s decree came weeks after Virginia Gov. Ralph Northam ordered the removal of the most prominent and imposing statue along the avenue: that of Confederate Gen. Robert E. Lee, which sits on state land. The removal of the Lee statue has been stalled pending the resolution of several lawsuits.

Once the equestrian statue was lifted from its base and lowered to the ground, just after 4:30 p.m., Stoney compared the moment to the end of the Cold War.

“The Berlin Wall fell, but also the system fell with it,” the 39-year-old mayor said.

“Now for us, as elected leaders, alongside our community, it’s our job to rip out the systemic racism that is found in everything we do — from government, to health care, to the criminal justice system.”