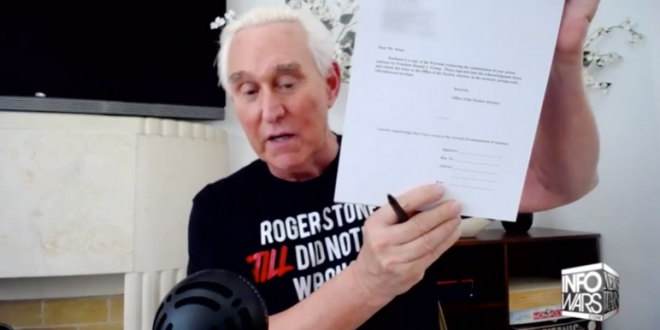 During the July 14 edition of The Alex Jones Show, Stone joined Infowars head Alex Jones, a conspiracy theorist perhaps most notorious for repeatedly claiming that the 2012 Sandy Hook Elementary School mass shooting was a hoax.

During the episode, Stone said he was “going to do something very historic now, right here on the air on Infowars, I’m actually going to sign my acceptance of the commutation by the president of the United States.” Stone signed the document and went on to compare his trial to “a lynching” and criticize the jurors who convicted him.

Stone also thanked several conservative media figures for cheerleading his commutation, which included Alex Jones (“who never abandoned me”), Tucker Carlson (“the standout. … He pounded it at every turn of the case”), Sean Hannity (“I believe he spoke to people in touch with the president ”), Fox News host Mark Levin, Rep. Matt Gaetz , and Trump official Larry Kudlow.