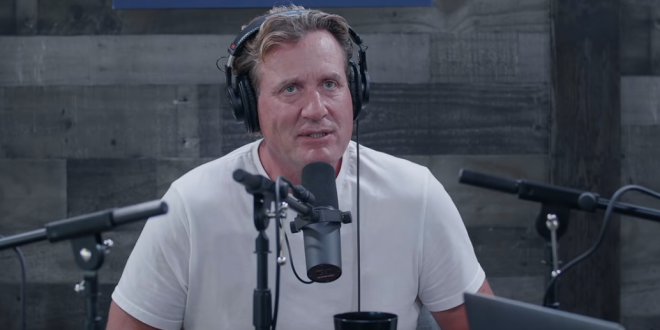 Hockey star Jeremy Roenick sued NBC Sports for wrongful termination on Friday, claiming the network discriminated against him as a straight man after he made off-color remarks on a Barstool Sports podcast.

“I’m swimming with my wife and Kathryn, and they’ve got their bikinis on, and they look f—in’ smokin’,” he said on the podcast in December. “Ass and boobs everywhere. It’s great.” Roenick was quickly suspended. He issued an apology, and his supervisor, Sam Flood, subsequently informed him that he was fired.

Roenick’s lawsuit states that figure skating commentator Johnny Weir made “colorful commentary” about skaters’ body parts for NBC Sports during the 2018 Winter Olympics, and when Roenick asked his supervisor about that, the supervisor responded that Weir “is gay and can say whatever.”

Roenick also claims that he was fired because the network was retaliating against him for his support of President Donald Trump. When he asked for permission to speak at the 2016 Republican National Convention, he alleges he was told: “You know who you work for. You work for NBC. That would not look good on your NBC record.”

Roenick has a long track record of controversial comments on and off the ice.

Trump Ferry Point wins. It’s an amazing golf course! I love my golf, and have played it many times. Amazing property! @TrumpFerryPoint pic.twitter.com/GUUlk5ATLv