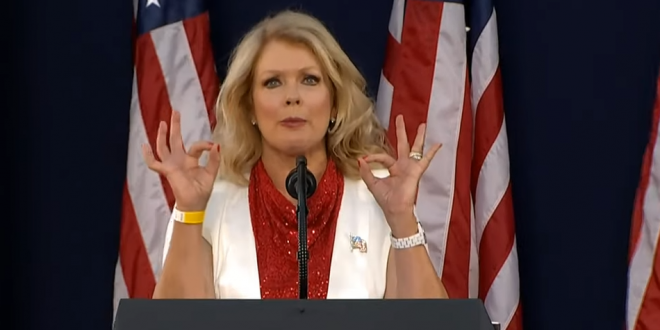 So Mary Hart Did This Last Night At Mt. Rushmore

Former Entertainment Tonight host Mary Hart has been out of the spotlight for many years. The former television star has finally made a reappearance, however, the internet doesn’t appear to be too happy about it.

Hart was seen hosting President Donald Trump’s rally at Mount Rushmore, as the President and First Lady Melania arrived at the historical site to kick off the July 4th celebrations.

When fans saw Hart at the event, many were taken by surprise, which was soon replaced with anger directed at her for not only supporting the President but also hosting an event for him.

The clip at the bottom is cued up.

Did Mary Hart just do what I think she did?!? pic.twitter.com/VJfMJ4YRkf

Yes, she did. Two tell-tale signs: The gesture is awkward and unnatural-looking, and it’s not in response to anything or matching her words.

Can we confirm Mary Hart’s son works in the Trump White House and her husband is a big Trump contributor? https://t.co/UMy1g11IIb

Burt Sugarman has given over $130K to Trump Victory and Donald J. Trump for President in the past two years. https://t.co/3B45sMih3V pic.twitter.com/Yc55duW33r

Son Alec/AJ is a special assistant to the president for legislative affairs, and former Mulvaney aide. https://t.co/aw9ZJ20MkE

Previous Junior And Hannity Invent Fake Biden “Gaffe” [VIDEO]
Next Trump: We’d Have Few Cases If We Didn’t Test So Much