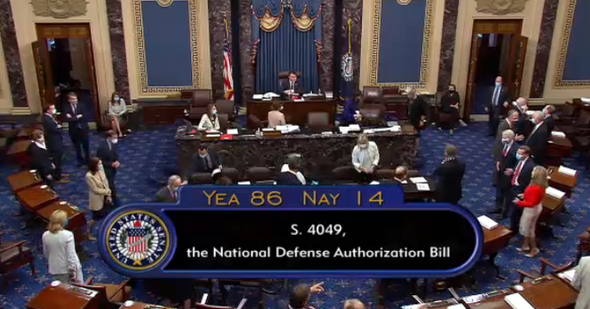 The Senate overwhelmingly passed a massive defense bill Thursday afternoon that includes the removal of Confederate names from army bases and creates a possible showdown between Congress and President Donald Trump, who opposes renaming the bases.

The bill passed by a lopsided count of 86 to 14, well over the number required to override a presidential veto. The bill, which authorizes $736.9 billion in military spending, includes a provision to form a commission on the names of military bases and rename bases over the next three years.

Senate Majority Leader Mitch McConnell praised the bill on the Senate floor earlier this week, calling it the “product of exhaustive, bipartisan effort.” The House passed its own version of the bill by a veto-proof majority earlier this week.

The bills now go into reconciliation.

#NDAA bill passed by the #Senate authorizes $740.5b for #Pentagon and other defense programs and require changes to U.S. military bases bearing the names of #Confederate generals. Total provides $636.4b for regular Pentagon budget & $69b for overseas contingency operations acct

Previous DOJ To Probe Use Of Federal Force In DC And Portland
Next New Quinnipiac Florida Poll: Joe Biden +13 Over Trump