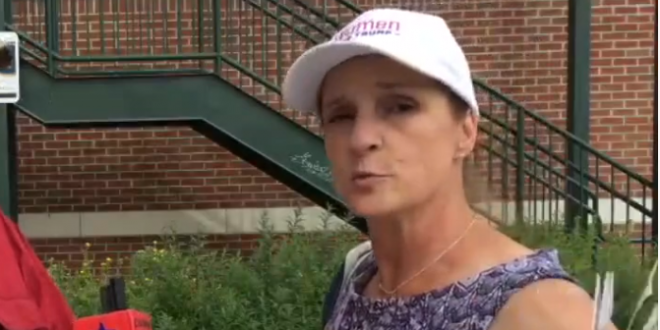 A radio host in New Hampshire went on a vile, racist tirade against a group of workers doing their job, because they dared to speak Spanish. Diana Ploss saw the workers who were doing landscaping in downtown Nashua, and she just went nuts, screaming, “It’s America. Speak English!”

An African-American man who happened to witness her tirade comes by and confronts her, and she barks back, “Because he’s a black man. He’s gonna protect the brown man from this white woman.” Afterward, she posted on her Facebook page, “I’m not backing down.”

We’ve seen a lot of racist videos, but rarely is the person who shoots it the racist herself. BTW … Ploss reportedly quit her job in 2016 to campaign for Trump. There’s a petition circulating for her to get the ax from her radio station. Hopefully, the petition is written in English and Spanish.

A group called MA 4 Trump was supposed to hold a get-together for supporters at JW’s in Winthrop, but the restaurant canceled the meeting yesterday. One of the group’s organizers is Dianna Ploss, who last year served as press secretary to anti-gay gubernatorial candidate Scott Lively and who organized a talk in Newton titled The U.S. Constitution and Sharia. Can they co-exist? She did that in her role as leader of the Boston chapter of the anti-Muslim Act for America.

The SPLC classifes ACT For America as a hate group as they do for Scott Lively’s ministry. In the video below, Ploss films herself screaming about Spanish, communism, and “illegals.” She also demands to know why the black guy is wearing a mask. On her Twitter page, she regularly retweets QAnon accounts such as the one seen below.

Self proclaimed Talk-Radio Personality and Maga Activist Dianna Ploss was on her way to the studio as she heard a caucasian construction worker speaking Spanish to other hispanic workers. This upset Dianna so she quickly whipped out her phone and took to Facebook Live to stream her confronting the workers. . . . #karen #karenmemes #memes #tiktok #like #beyonce #publicfreakout #funnyvideos #funny #funnymemes #memes #comedy #meme #tiktok #kyliejenner #lol #lb #fb #follow #viral #lgbt #like #explorepage #instagram #love #humor #video #jokes #laugh