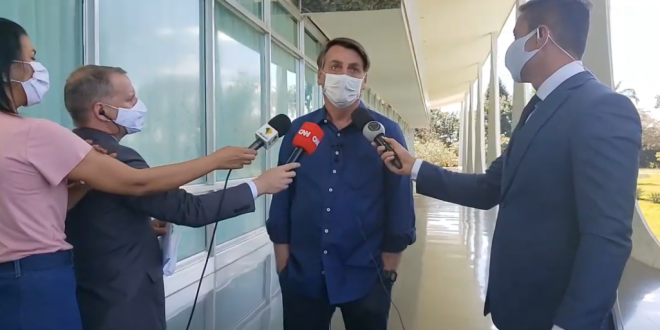 Reporters To Sue Bolsonaro Over Exposure To COVID

The Brazilian Press Association announced  today that it will file a lawsuit before the Supreme Court against President Jair Bolsonaro, whom it accuses of “endangering” the journalists who attended the announcement of his positive COVID-19 test result. “Despite knowing he was infected with COVID-19, President Jair Bolsonaro continues to act in a criminal manner and endanger the lives of others,” ABI President Paulo Jeronimo de Sousa said in a statement.

De Sousa said the president “broke the isolation recommended by the doctors” and “received journalists from media he considers to be supportive” of his policies to “personally inform them” that he is infected with the virus. The 65-year-old head of state, one of the world’s leaders most skeptical about the seriousness of the disease, appeared with a simple white mask and without observing any social distance from the reporters.

Previous WHO Sets Up Panel To Review Its COVID Response
Next BREAKING: SCOTUS Rules Trump Must Disclose Taxes