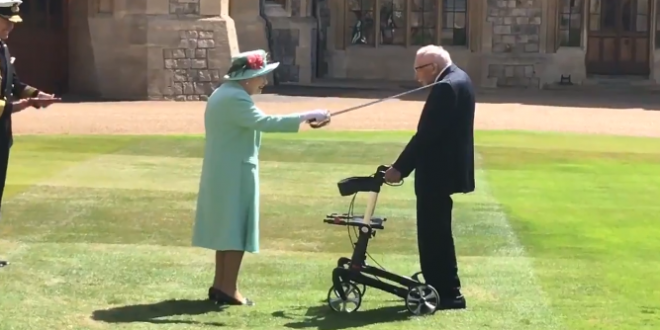 The WWII veteran who raised millions for Britain’s National Health Service during the coronavirus pandemic was bestowed the highest of accolades on Friday receiving knighthood from Queen Elizabeth II.

Sir Tom Moore, whose fundraising campaign captured the hearts of the country, met with the Queen at Windsor Castle for a private ceremony with members of his family.

The centenarian began his campaign to support the health service in April by pledging to walk 100 laps around his 50-yard-long garden before his 100th birthday. His daughter, Hannah Ingram-Moore, who proposed the idea, hoped it would simply encourage the veteran to stay active during the coronavirus lockdown.

Moore ultimately raised £33 million after his effort went internationally viral. He was later paid tribute with a flyover of World War II-era aircraft.