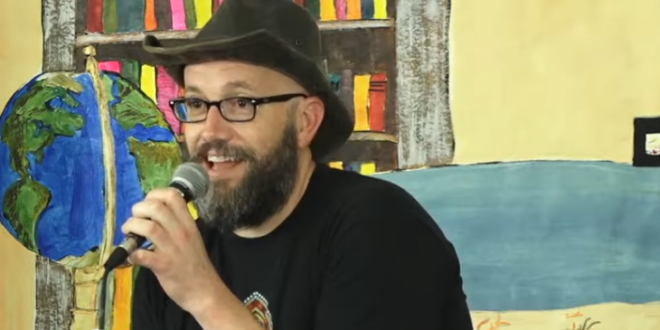 Christian author Matthew Paul Turner came out as gay on social media and announced that he and his wife are divorcing as he seeks to “embrace freedom, hope, and God as a gay man.” “Dear friends, I have difficult news to share. After much thought, prayer, and counseling, Jessica and I have made the decision to end our marriage,” he wrote. “While we’re best friends and thoroughly love doing life, parenting, and pursuing our dreams together, ending our marriage is necessary because I am gay.”

The Nashville-based couple, who married in 2004, have three children together. Turner has been described as “one of the most influential progressive Christian voices in media.” The author of 16 books including The Christian Culture Survival Guide, The Coffeehouse Gospel, and Provocative Faith, Turner previously served as the entertainment editor for Crosswalk and was a frequent contributor to Relevant Magazine.

I have difficult news to share. After much thought, prayer, and counseling, Jessica and I have made the decision to end our marriage. While we’re best friends and thoroughly love doing life, parenting, and pursuing our dreams together, ending our marriage is necessary because I am gay. ▪️ Being gay isn’t a new discovery for me. However, as someone who spent 30+ years in fundamentalist/evangelical churches, exploring God through conservative theologies, I lived many days overwhelmed by fear, shame, and self-hatred. Though my own faith evolved long ago to become LGBTQ+ affirming, my journey toward recognizing, accepting and embracing myself took much longer. But for the first time in my life, despite the sadness and grief I’m feeling right now, I can say with confidence that I’m ready to embrace freedom, hope, and God as a gay man. ▪️ I would not be able to say that without Jessica’s undying grace and support. I fell in love with her 17 years ago and still love her deeply. Despite her own grief and pain, she has loved and encouraged me to be fully me. Many of the steps I’ve taken recently wouldn’t have happened without Jessica walking beside me, helping me through every fear. Jessica is and will always be my hero. She’s brave, strong and showcases love like nobody I know. ▪️ Our utmost desire is to move forward in love and compassion for each other and put the well-being of our kids first. Coming out to my kids was one of the hardest, most beautiful things I’ve ever done. Loving and protecting their stories will always be our first priority. ▪️ I will continue to write children’s books and am grateful for the support of my publisher Convergent Books. Writing books about wholeness, hope, and God’s love for children is an honor and privilege I do not take for granted. ▪️ That said, we ask that you be kind and respectful toward us. Anyone who posts comments laced in shame, criticism of our family, our theology, or our choices will be blocked. ▪️ Throughout these hard months, Jessica and I have looked at each other many times and said, “we’re going to be okay.” And on most days, we fully believe that. Please keep us in your thoughts/prayers as we engage this new path.