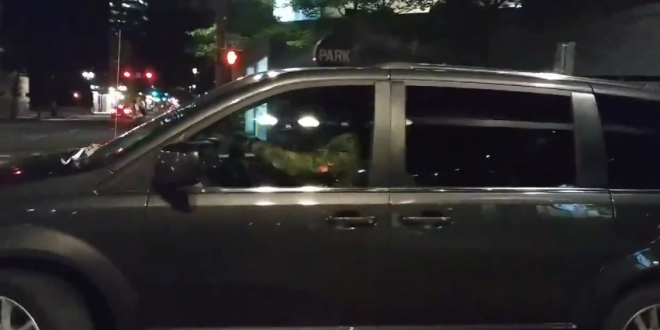 The US Attorney for the Oregon District today requested an investigation into the masked, camouflaged federal authorities without identification badges who are arresting protesters in Portland. The request is aimed specifically at DHS personnel who have been captured on various videos arresting protesters and putting them in unmarked SUVs.

Demonstrators in Portland have been protesting racial inequality and police brutality for the last 50 nights, US Attorney Billy J. Williams said in a statement.

Federal authorities have protected the Mark O. Hatfield US Courthouse and, at times, interaction between protesters and law enforcement has gotten violent. Last weekend, one protester was seriously injured after the man was shot in the head with impact munition.

Videos shared online show officers driving up to people, detaining them without explanation, then driving off, Oregon Public Broadcastingfirst reported. The ACLU filed a lawsuit Friday evening to try and end what it called “lawlessness” on the streets of Portland.

The lawsuit — the first of several that the ACLU said is to be filed against the Trump administration in Portland — seeks to block the Department of Homeland Security and other agencies from attacking journalists and legal observers at protests.

The mayor of Portland demanded Friday that President Donald Trump remove militarized federal agents he deployed to the city after some detained people on streets far from federal property they were sent to protect.

“Keep your troops in your own buildings, or have them leave our city,” Mayor Ted Wheeler said at a news conference.

Democratic Gov. Kate Brown said Trump is looking for a confrontation in the hopes of winning political points elsewhere. It also serves as a distraction from the coronavirus pandemic, which is causing spiking numbers of infections in Oregon and the nation.

BREAKING: The @ACLU_OR is taking federal authorities in Portland, Oregon, to court.

This is a fight to save our democracy. These federal agents must be stopped and removed from the city.

These are not the actions of a democratic republic.@DHSgov’s actions in Portland undermine its mission.

Trump & his stormtroopers must be stopped.

Authoritarian governments, not democratic republics, send unmarked authorities after protesters. These Trump/Barr tactics designed to eliminate any accountability are absolutely unacceptable in America, and must end. pic.twitter.com/PE4YfZ9Vqd

.@CBP will continue to arrest the violent criminals that are destroying federal property & injuring our agents/officers in Portland. CBP will restore and maintain law & order. pic.twitter.com/fYgzpTwPWh

“I offered @DHSgov support to help locally address the situation that’s going on in Portland, and their only response was: please pack up and go home. That’s just not going to happen on my watch.” pic.twitter.com/BW8UdbNZ9c

Previous Trump “Saddened” About Death Of Rep. John Lewis
Next Newsom Was Told That If He Wanted Testing Swabs He’d Have To Ask Trump Himself And Then Thank Him