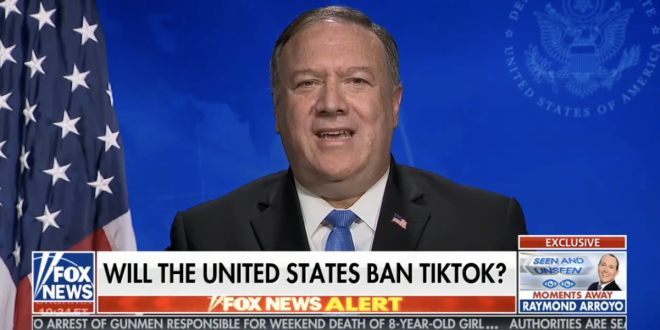 Pompeo: The US Might Ban TikTok, Other Chinese Apps

The United States is “looking at” banning Chinese social media apps, including TikTok, Secretary of State Mike Pompeo said Monday. Pompeo suggested the possible move during an interview with Fox News’ Laura Ingraham, adding that “we’re taking this very seriously.” Pompeo was asked by Ingraham whether the United States should be considering a ban on Chinese social media apps, “especially TikTok.”

“With respect to Chinese apps on people’s cell phones, I can assure you the United States will get this one right too, Laura,” he said. “I don’t want to get out in front of the President [Donald Trump], but it’s something we’re looking at.” Washington’s top diplomat added that people should only download the app “if you want your private information in the hands of the Chinese Communist Party.”

TikTok says it has never provided user data to the Chinese government and wouldn’t do so if asked. Surely this has nothing to do with Trump’s Tulsa rally.

Previous Ingraham: Dems Must Apologize For Slandering History
Next FLORIDA: All Schools Ordered To Reopen Next Month