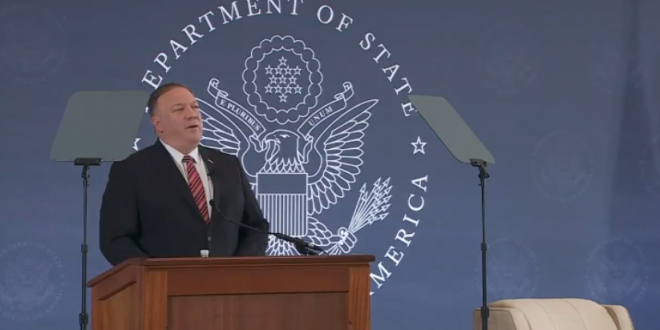 The New York Times’s 1619 Project is an attack on “the American way of life” that aligns with the Chinese Communist Party, according to Secretary of State Mike Pompeo.

“They want you to believe Marxist ideology that America is only the oppressors and the oppressed,” Pompeo said Thursday at the National Constitution Center in Philadelphia. “The Chinese Communist Party must be gleeful when they see the New York Times spout this ideology.”

Pompeo issued that rebuke at the unveiling of a new report from the Commission on Unalienable Rights, a panel he convened last year to provide “an informed review of the role of human rights in American foreign policy.”

Controversy has swirled around the commission since its creation. Its 11 members are predominantly professors and scholars. They include three women, one African American, one Asian, a rabbi and the president of a Muslim liberal arts college. Seven members are white men.

Hundreds of human rights advocates and former diplomats have signed letters objecting to the panel’s mission, saying it suggests some rights have more priority than others.

A coalition of rights groups filed a lawsuit saying the commission aims to undercut rights for LGBT people, restrict reproductive and sexual rights, and erode protections for marginalized people.

Secretary of State Mike Pompeo argued Thursday for a more limited U.S. view of global human rights advocacy based on the principals laid out by America’s Founding Fathers, a suggestion critics assumed meant stepping away from more modern concepts such as support for women and the LGBTQ communities around the world.

The report did not produce any specific recommendations and steered clear of endorsing policy proposals. But experts who parsed it for direction noted, for example, that it referred to abortion and same-sex marriage not as rights but “divisive social and political controversies.”

Critics also faulted the makeup of the commission, saying it was weighted with conservatives, and the public did not have sufficient opportunity to weigh in on its findings before the report’s release.

The @NYTimes’s 1619 Project wants you to believe our country was founded for human bondage. What a dark vision of America’s birth. What a disturbed reading of history. What a slander on our great people. pic.twitter.com/s24rA3C3m8