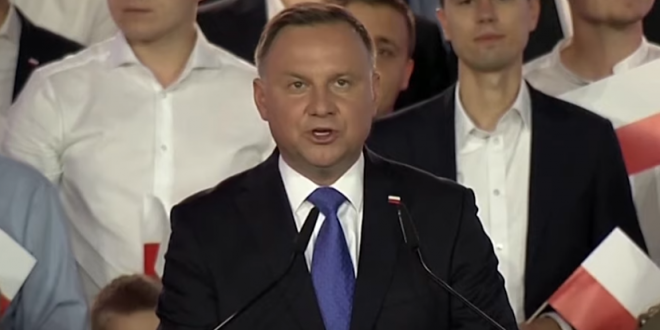 Polish President Andrzej Duda, a conservative who ran a campaign with homophobic and anti-Semitic overtones, narrowly won a second five-year term in a bitterly fought weekend election, defeating the liberal Warsaw mayor, according to a near-complete count of votes.

Duda’s supporters celebrated what they saw as a clear mandate from voters for him and the right-wing ruling party that backs him, Law and Justice, to continue on a path that has reduced poverty but raised concerns that democracy is under threat.

Critics and human rights groups expressed concerns that Duda’s victory would boost illiberal tendencies not only at home but also within the EU, which has struggled to halt an erosion of rule of law in Hungary under Prime Minister Viktor Orban.

Andrzej Duda’s victory is a failure to respect rule of law and human rights in Poland. There is no hope of improving the situation of minorities. Further violations of LGBT rights and the legal system in Poland will become a ‘daily bread’ for Poles. #wybory2020

The president of Poland Andrzej Duda said a couple of weeks ago during his presidential campaign speech that LGBT are not human. This barbaric comment already led to attacks on LGBT in Kraków and Warsaw last week.#lgbtq #poland #homophobia #homophobicattacks #polska #wybory2020 pic.twitter.com/mVO257bOOC

Solidarity with all the LGBTQ+ people in Poland. President Andrzej Duda who was re-elected yesterday recently signed a ‘family charter’ planning to prevent same-sex marriage, adoption and protecting children from ‘LGBT ideology’. We can’t let it go unchallenged, we see you. pic.twitter.com/I8B3rZsbFf

Good to see a Eurosceptic win in Poland.