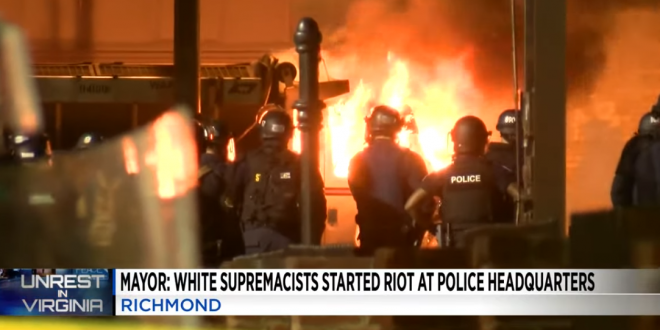 Riots in downtown Richmond over the weekend were instigated by white supremacists under the guise of Black Lives Matter, according to law enforcement officials. Protesters tore down police tape and pushed forward toward Richmond police headquarters, where they set a city dump truck on fire.

Six people were arrested. The mayor of Richmond thanked the Black Lives Matter protesters he said tried to stop the white supremacists from spearheading the violence. “Their mission is simple, not the Richmond we know,” said Mayor Levar Stoney.

Previous Trump Laments Approval Ratings: “Nobody Likes Me”
Next Gay Critical Care Doc Dies Of COVID In His Own ICU