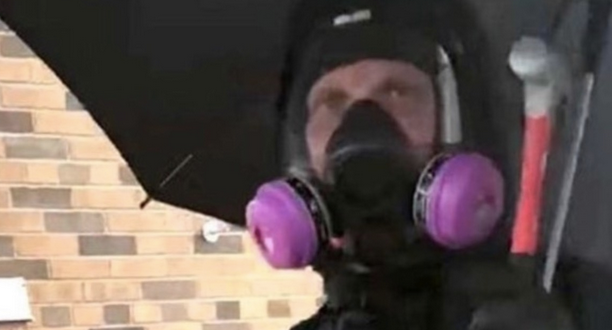 The masked white man recorded smashing the windows of a Minneapolis AutoZone during an early George Floyd protest is a suspected white supremacist who was trying to incite racial tension, cops reportedly believe. A Minneapolis Police arson detective says the 32-year-old man’s actions, which were captured on video, help set off a chain reaction that led to the store burning and days of looting and rioting.

“This was the first fire that set off a string of fires and looting throughout the precinct and the rest of the city,” the investigator, Erika Christensen, reportedly wrote in the affidavit filed in court this week. Police reportedly believe the suspect is a member of the Hell’s Angels biker gang and an associate of the Aryan Cowboy Brotherhood, a white supremacist group based primarily in Minnesota and Kentucky.

The video, filmed on May 27, showed a man dressed in all black methodically smashing windows of an AutoZone in Minneapolis during racial justice protests over the police killing of George Floyd.

The man also spray painted “free shit for everyone zone” on the building’s doors. The man appeared to be dressed as an anti-fascist, but was eyed as a possible infiltrator or “outside agitator” when protesters tried to question him over his activities.

Police say they have received a tip that the man is Mitchell Carlson. Carlson was implicated in another recent incident, according to the affidavit: He was allegedly present when the Aryan Cowboys were accused of harassing a Muslim woman in late June.

Carlson’s Facebook page is reported to be littered with swastikas and Hitler memes.