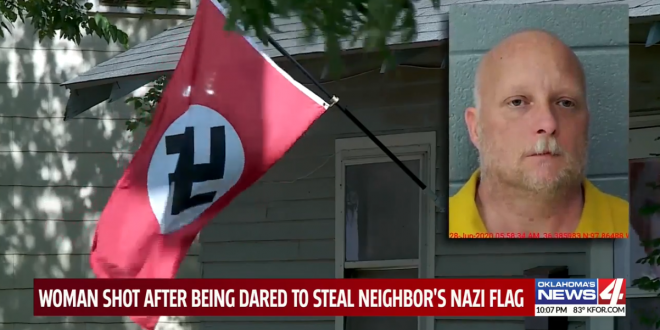 A 26-year-old woman was shot multiple times after she tried to steal a Swastika flag from a front yard in Oklahoma. Authorities said the woman was dared at a party across the street to try and steal one of the Nazi flags the front yard of Alexander John Feaster’s front yard in Hunter.

“On the way back someone hollered gun, she dropped the flag at the end of the driveway and shots were fired,” Garfield County Sheriff Jody Helm said. Feaster is being held on charges of shooting with the intent to kill, assault and battery with a deadly weapon.

Deputies in Hunter, a small town about 90 miles north of Oklahoma City, found the 26-year-old woman in a ditch Sunday after she had been shot in the back by Feaster between three and five times with a 5.56mm rifle, according to the sheriff.

“Without warning, Feaster opened fire on Kyndal as she was running away from the residence. On the video footage, it appeared that Feaster fired approximately 7-8 shots very rapidly. Several of these rounds striking Kyndal.

“It is important to note that Kyndal did not appear to be in any way, a threat to Feaster due to her obviously running away from his residence with only a flag in her hand.”