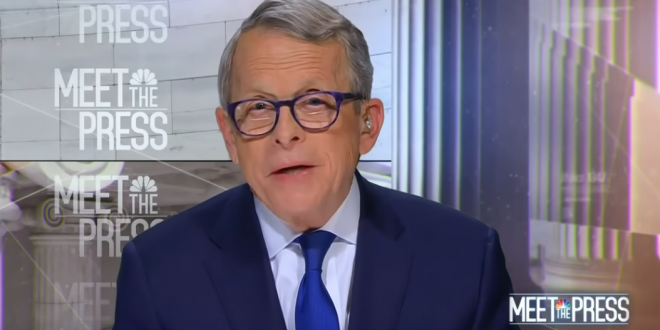 Ohio Gov. Mike DeWine encouraged action but mandated none during his Wednesday evening coronavirus address. The governor appealed to Ohioans on an emotional level to make “once-in-a-hundred year sacrifices” to protect their neighbors — whether or not the government requires them to do so.

“Ohio has reached the most critical point in the battle against COVID-19,” the governor intoned. “If we don’t take immediate action to slow this virus down, the tragedies we’re seeing in Florida, Texas, Arizona and California may be Ohio’s reality in just a matter of weeks.”

His address was much-anticipated or dreaded by many across the state, several who expected some sort of additional mandate. But none came Wednesday.

From an op-ed in the Cincinnati Enquirer:

Ohio Gov. Mike DeWine took to the airwaves Wednesday to make a special announcement concerning the rising spike in coronavirus cases. Did Gov. DeWine mandate masks? Raise the threat levels of highly at-risk counties, such as Hamilton and Butler, from red to purple status? Announce a new lockdown?

Nope. Instead, Ohioans got DeWine essentially asking us to pretty, pretty please wear a mask. He talked about how, early on, Ohio “flattened the curve” of the coronavirus. Of course, back then we were under the medical leadership of Dr. Amy Acton.

But the state opened too early. Too many people refuse to wear masks, mistaking selfishness for individual liberty. Too many want to pretend — or flatly believe — the coronavirus doesn’t pose a threat, even when cases are skyrocketing.

Some Democrats, including Ohio party Chairman David Pepper, who once lost to DeWine in an attorney general’s race, faulted the governor for coming up short, in his view, saying a statewide mask order was needed, rather than “televised pep talks or confusing color-coded maps.”

“As someone who publicly praised the governor in the early months of this crisis, I could not be more disappointed in his speech today. As cases and deaths rise, he announced nothing that will change that direction,” Pepper said.