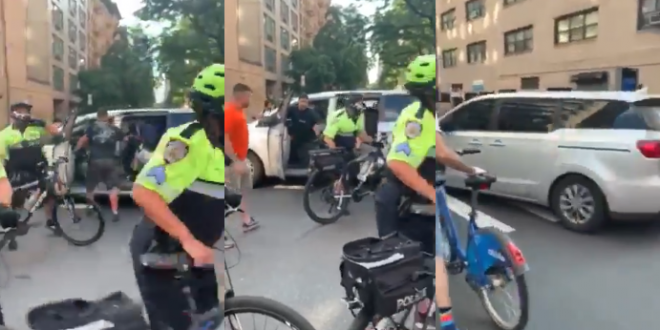 An anti-police protester has been released following an arrest that has protesters and some New York City elected officials demanding answers. 18-year-old Nikki Stone, a trans woman from the Lower East Side, was released at 1 a.m. Wednesday to cheers from her fellow protesters.

She said she had some scrapes on her knees but was otherwise fine. Stone was in police custody for about five hours before being released on a desk appearance ticket. She was charged with vandalism and criminal mischief.

It is video of her arrest that people are upset about, showing the activist being thrown into an unmarked van by plain clothes officers. This is standard procedure for the warrant squad, but typically that squad goes after more dangerous people.

The videos of the chaotic scene, which bore a marked similarity to the controversial tactics used by federal officers to detain demonstrators in Portland, Ore., quickly went viral.

Protesters who witnessed the incident described it as a “kidnapping,” while a number of New York’s elected officials, including Rep. Alexandria Ocasio-Cortez (D-N.Y.), decried the officers’ actions and demanded further explanations from the NYPD.

“Our civil liberties are on brink. This is not a drill,” Ocasio-Cortez tweeted. “There is no excuse for snatching women off the street and throwing them into unmarked vans.”

As videos of the arrest sparked outrage online, the NYPD tweeted that the woman was “wanted for damaging police cameras during 5 separate criminal incidents in & around City Hall Park.” They added that officers were assaulted by rocks and bottles in the process of making the arrest.

But at least three people at the scene who spoke to Gothamist disputed that narrative. “None of that happened whatsoever,” said Clara Kraebber, a 20-year-old Oxford student. “We literally turned the corner and were met with a line of police who attacked us without warning.”

She added that officers used pepper spray “seemingly at random” against the group as the arrest was in progress. “They were trying to make it painful to be there.”

In regard to a video on social media that took place at 2 Ave & 25 St, a woman taken into custody in an unmarked van was wanted for damaging police cameras during 5 separate criminal incidents in & around City Hall Park. The arresting officers were assaulted with rocks & bottles. pic.twitter.com/2jGD3DT3eV

I’m not a tough guy, but if Id seen your unidentified thugs throwing a woman into an unmarked van after snatching her off the street, not only would I have thrown something, Id try to tackle you since id believe you had to be militia nuts. I’ve never seen real cops act like this.

Here’s my full video of what happened on 25th & 2nd in NYC! Keep in mind this was a peaceful protest that was headed to Madison Sq Park for a meditation & an unmarked van snatched a protester & NYPD started attacking us! #BLM pic.twitter.com/USUGgIDDIH

Concerned about what we are seeing in this video. Reaching to try and get some answers https://t.co/uhtQGMKIwE

We’ve just received confirmation that Nikki has been released. Thank you to all the advocates who have been bringing support and attention. Now it’s time to hear from @NYCMayor about how he will address this arrest and the future of unidentifiable policing in NYC.