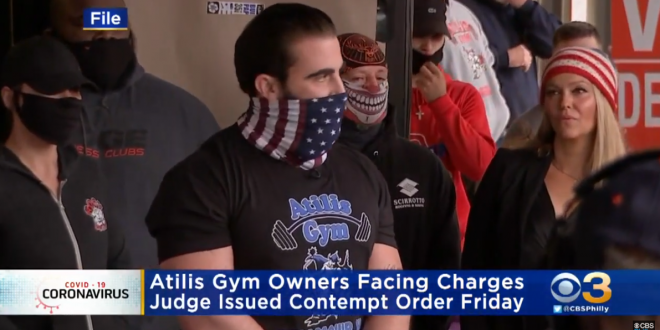 Two New Jersey gyms owners who have repeatedly reopened in defiance of the state’s coronavirus lockdown have been arrested, police said Monday.

Atilis Gym owners in Bellmawr— Ian Smith, 33, of Delanco Township, and Frank Trumbetti, 51, of Williamstown — were charged with contempt and violation of a disaster control act, according to the Camden Couty Prosecutor’s Office.

The two owners have continually railed against Gov. Phil Murphy’s executive order amid the pandemic COVID-19 and even sued lawmakers claiming their constitutional rights were violated when they were forced to close their South Jersey gym.

Last week a New Jersey judge ruled that Gov. Phil Murphy had the authority to order the gym to be closed. Last month far-right extremists and militia members joined a protest outside a gym which was covered live by Fox & Friends, whose producers dispatched host Pete Hegseth to the scene.

Cops complying with these orders is what gets me. I’m done taking up for weak ass cops violating their constitutional oath! pic.twitter.com/J3vsM86JmY