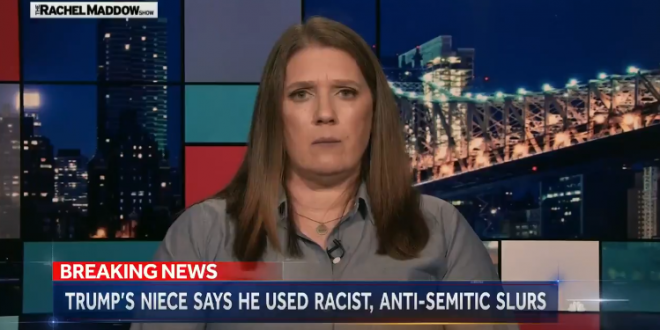 Mary Trump’s book, Too Much and Never Enough: How My Family Created the World’s Most Dangerous Man, was released on Tuesday. She told The Washington Post that growing up in her family, she witnessed “knee-jerk anti-Semitism” and “knee-jerk racism.”

Rachel Maddow asked Mary Trump about this, and whether she ever heard her uncle “express either anti-Semitic slurs or the n-word or other racist slurs.”

She quickly responded, “Oh yeah, of course I did. I don’t think that should surprise anybody given how virulently racist he is today.” Maddow followed up by asking if she heard the president use the N-word, and Trump replied, “Yeah.”

In the Washington Post interview noted above, the writer notes that Mary Trump is gay. She says, “Homophobia was never an issue because nobody ever talked about gay people, well, until my grandmother called Elton John a slur.” The Maddow interview airs tonight.

Previous #QAnon Show: The Clintons Have Been Executed And Trump Will Show It On A WH Pay-Per-View Channel
Next Georgia Gov Sues Atlanta Mayor Over Mask Mandate