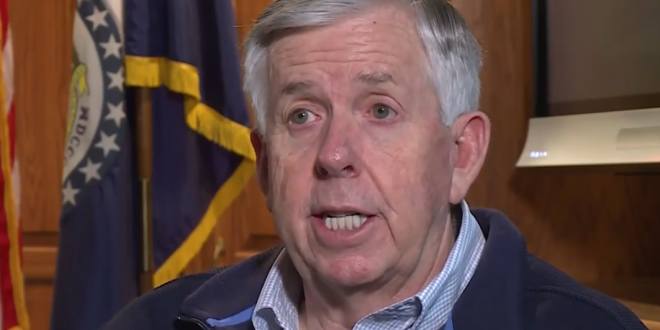 Missouri Gov. Mike Parson told a radio host that based on the information he’s received, it’s likely he would pardon a white St. Louis couple if they are charged for brandishing guns during a racial injustice protest outside their mansion.

Democratic Circuit Attorney Kim Gardner is investigating Mark and Patricia McCloskey, both in their 60s, for an incident on June 28. Protesters who were marching to the nearby home of Mayor Lyda Krewson walked onto the private street where the McCloskeys live.

Parson cited Missouri’s “castle doctrine” law that justifies lethal force for those protecting their homes. US Sen. Josh Hawley is seeking a U.S. Department of Justice investigation of Gardner.

Republicans @GOP & President @realDonaldTrump are working hard to take violent criminals off of our streets and stop these crazy efforts to defund the police. Joe Biden and the Democrats are allowing the radical left to make our communities less safe.

We will not allow law-abiding citizens to be targeted for exercising their constitutional rights. https://t.co/6t5dUxdVgp