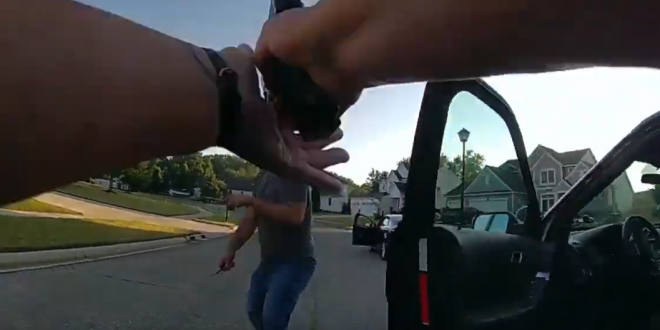 A Michigan man who refused to wear a mask inside a store was later shot and killed by a deputy after he stabbed another customer during an argument about the mask issue, police said.

Investigators said the argument happened around 6:45 a.m. Tuesday at the Quality Dairy store in Dimondale. The argument ended with a 77-year-old Lansing man suffering from stab wounds.

The manager of the store said Sean Ernest Ruis, 43, of Grand Ledge, stabbed the 77-year-old man simply because he asked Ruis to put on a mask. Officials said the 77-year-old was rushed to the hospital and underwent surgery. He is going to survive, medical officials said.

An Eaton County Sheriff’s deputy pulled over Ruis on a residential street in neighboring Delta Township at 7:13 a.m., leading to the brief, fatal encounter official said.

“The suspect immediately exits his vehicle and walks towards the deputy with a knife in hand to attack the deputy,” according to a statement from state police. “The deputy attempted to increase distance by backing up and subsequently shot and injured the suspect. The suspect was transported to a local hospital and died during surgery.”

Both the Eaton County Sheriff’s Department and state police released graphic video of the deadly confrontation, which appeared to show a man approaching the deputy. The deputy could be heard screaming “Drop the knife!” and “Drop the weapon!” several times in the footage.

That last clip below. Whoa.

A Michigan sheriff’s deputy fatally shot a man suspected of stabbing another man who had challenged him about not wearing a mask at a convenience store, police said https://t.co/pjcxihJng0

Man refusing to wear a mask stabbed 77-year-old man wearing one, arguing over Michigan’s new mask mandate. The maskless man allegedly pulled the knife on deputies who followed him back at his house, and deputies shot him dead. https://t.co/byyQiB8oWP