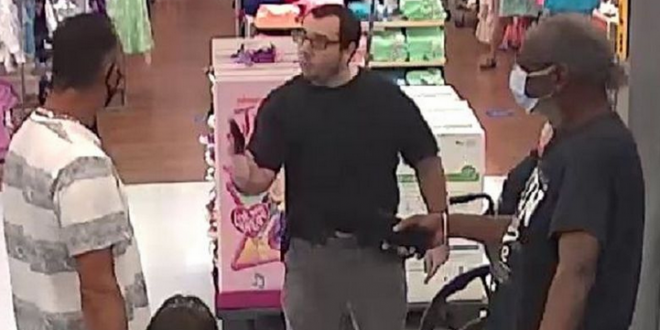 The man seen in surveillance video pulling a gun in Walmart during a debate over COVID-19 masks has been arrested. Vincent Bruce Scavetta, of Lake Worth Beach, faces charges of aggravated assault with a deadly weapon and improper exhibition of a firearm.

He was seen on video pulling a handgun from his waistband after another man in Royal Palm Beach asked him to wear a mask while shopping.

Scavetta, 28, was pushing an older man in a wheelchair at the Walmart, at 9990 Belvedere Road when he was approached by Christopher Estrada, who was shopping with his young daughter. Estrada asked Scavetta to wear a mask due to COVID-19, according to an arrest report.

Estrada told deputies that man, Scavetta, swore at him. The two argued for a few minutes, drawing the attention of other customers who tried to break up the two men, Estrada said.

When Scavetta reached toward the waistband of his shorts, Estrada reportedly told him that he didn’t care about his gun — a moment captured in the viral video. Then Scavetta pulled out his gun, pointed it at Estrada and said, “I’ll kill you,” authorities said.

Other shoppers stepped in and both men walked away, according to the report. While Scavetta and his father left the store immediately, Estrada stayed at Walmart with his daughter and called the sheriff’s office, the report states. Scavetta has an active concealed weapons license, sheriff’s officials report.