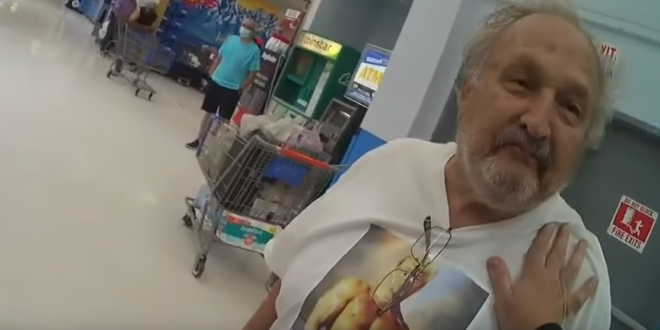 Man In Trump Shirt Spits On Cops In Mask Dispute

A man was arrested at a Las Cruces Walmart after allegedly refusing to a mask and spitting on several officers as he was being escorted away.

Around 1:44 p.m. on July 12, a Walmart employee told a Las Cruces Police Department officer working overtime at the store at 1550 S. Valley Drive that a man had entered the store and was refusing to wear a mask, according to a police report.

The man, identified as Charles Madrid III, was allegedly asked if he had a medical condition or other reason he could not wear a mask. Madrid allegedly told Walmart employees he wasn’t going to wear a mask and to call the Doña Ana County Sheriff’s Office because he would be gone before deputies arrived.

During the arrest, Madrid said, “You’re gonna have to drag me out, bro. I’m sick. I’ve got the fucking virus. I’m gonna spit in your face.”

He later shouted, “These fuckers got you wearing masks and that kind of virus doesn’t survive in the summertime it only comes in the winter. It’s the same class of virus as the cold and the flu.”

He was charged with multiple counts of assaulting police, resisting arrest, and trespassing.